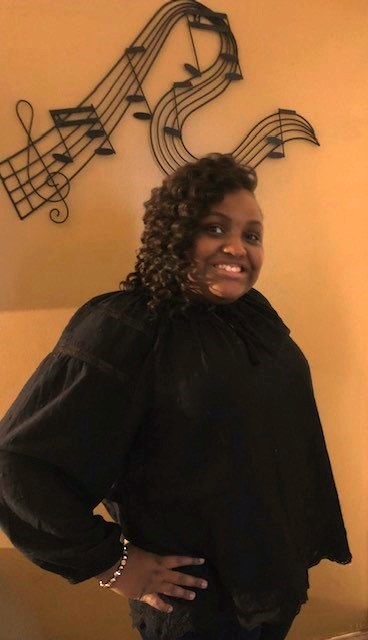 As she walked into the school auditorium for a Black History Month program, Raya Smith’s eyes lit up. “You’re going to sing today,” her teacher told her.

The notion might have seemed strange to Raya’s Columbus Alternative High School classmates. Up to that moment in late February, they had never heard her utter a word.

But for the next four minutes and 44 seconds, everyone in the audience listened with rapt attention as Raya – who has autism and doesn’t speak – stood onstage and filled the big room with her big voice. The 18-year-old chose And I Am Telling You for her performance and she sang it flawlessly. This link opens a Facebook page in a new tab.

The auditorium erupted not only in applause, but also with standing ovations and tears.

“I couldn’t even stay in the room, I was so emotional,” said Anika Brown, an instructional assistant who works closely with Raya at Columbus Alternative. “For someone who is non-verbal? I’ve never seen anything like it.”

Seeing the reactions of Raya’s typical peers felt wonderful, especially after the pandemic had caused students to miss so much over the past two years, said Raya’s mom, Angela Jones. “One of her teachers said, ‘If they didn’t know her then, they do now,” said Jones, who also is a service coordinator at the Franklin County Board of Developmental Disabilities.

Raya has language, but doesn’t use it to communicate with speech, her mom said. “She’s unable or chooses not to. I talk to her constantly; if she answers me one day, I’ll have a heart attack.”

Though she seems to prefer singing, Raya also reads music and plays various instruments. Her grandfather bought her first keyboard at age 4 and she took to it immediately. “She just started playing,” Jones said. “The words that came out, you couldn’t understand them, but you could tell what the song was.”

Raya also has perfect pitch, Jones said. “She doesn’t like it if you’re not on key or you mess up. She looks at me and laughs when I try to sing.”

It’s possible for people to have dramatically different abilities when it comes to speech and singing, said Dr. Gene Arnold, a psychiatrist and professor emeritus at Ohio State University. “Music is in the right brain and ordinary speech is in the left,” he said. “It’s believed that autism has a tendency for left-brain impairment and right-brain skills.”

There have been cases of people with left-hemisphere brain damage, for example, who lose the ability to speak, but “can answer your question if they sing the answer,” Arnold said. And then there those with a so-called savant skill, or extraordinary aptitude in an area such as music or math, that stands out like “an island of genius” amid the challenges of autism, he said.

Raya’s mind may work differently, but it also does so beautifully, her family and teachers say. Brown, one of her instructors at Columbus Alternative, has observed Raya as the teen moves into her “mode,” immersing herself in music.

“She’ll have her headphones on, listening, and she’ll start crying,” Brown said. “You see the tears and she’s just moving. They say music is the universal language, right? For Raya, it really is.”