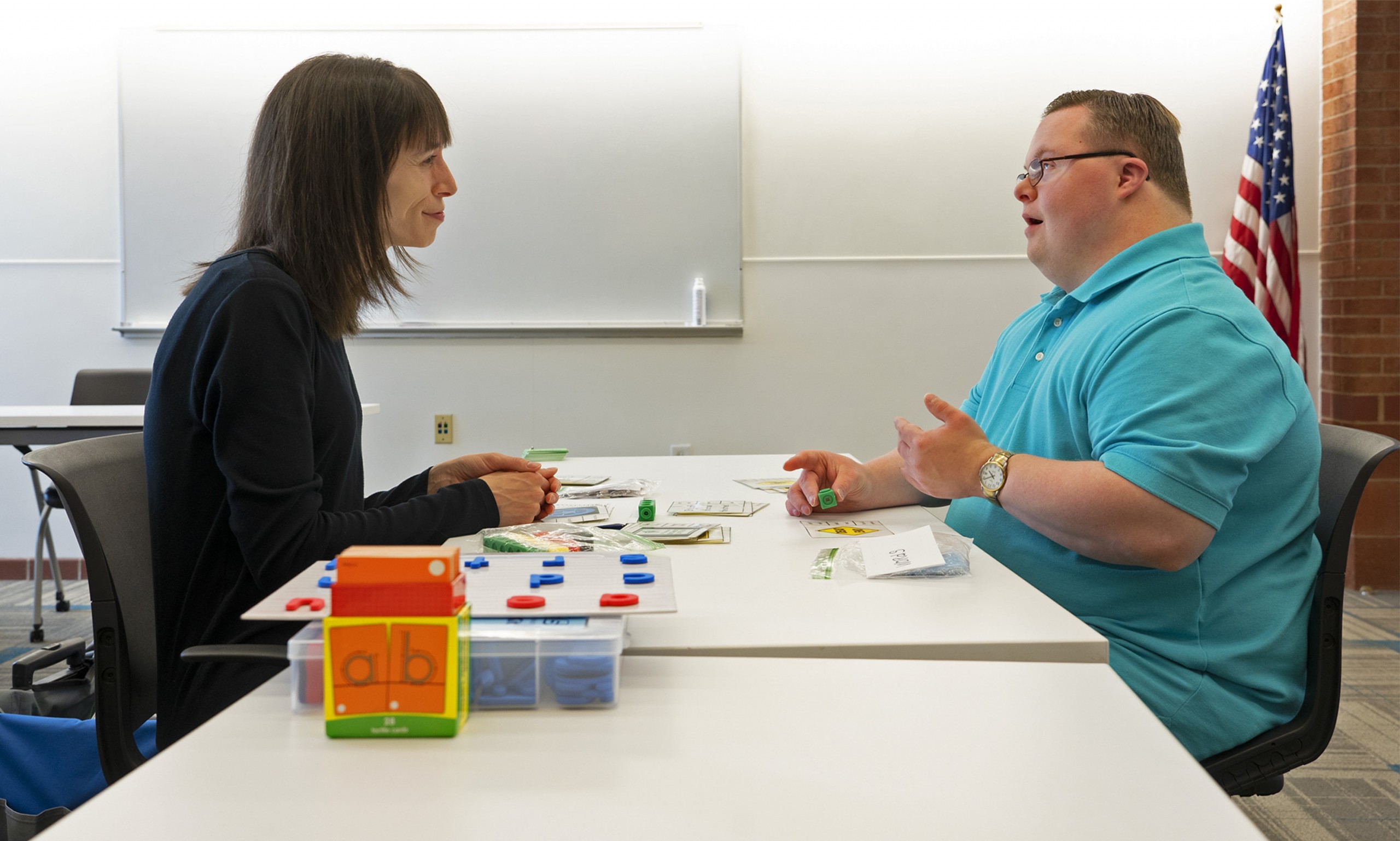 When it came to reading, Ethan Boerner didn’t make a lot of progress in school. “It just seemed so hard,” said Boerner, who has Down syndrome. “I wasn’t interested.”

He never really got the chance to discover whether he might have been more successful as an older student. His educational programs moved along, and Boerner – like many others with developmental disabilities – reached adulthood without having mastered basic reading skills.

But thanks to a pilot adult-literacy effort through the Down Syndrome Association of Central Ohio, the 31-year-old Reynoldsburg resident is quickly gaining ground. “We don’t have a magic bullet program, but we’re diving in,” said Rachel Heiber of DSACO. “We’re leaning in to the idea that our adults should have access to this kind of support with licensed educators.”

Boerner, a member of the Self-Advocate Advisory Council for the Franklin County Board of Developmental Disabilities, is an eager participant in the literacy program. He was among nine enrollees when it began in February, and now is one of six adults continuing with a reading tutor this summer.

“He’s read some books, which is amazing,” said Ed Boerner, Ethan’s dad. “We tried when he was in school, but he never took to it. Now he’s really excited. The first thing you want with learning something new is the desire – and Ethan’s got it.”

DSACO President and CEO Kari Jones said no other area programs focus on literacy for adults with developmental disabilities. And yet, she said, equipping them with resources to improve reading skills can lead to increased independence, greater employment opportunities and better quality of life.

“For some, reading support is stopping even before they reach the end of their school years,” said Heiber, the adult literacy specialist at DSACO. “It’s stopping as soon as they hit a classroom and someone says, ‘We’re switching to job skills now.’ And job skills are so important – there’s nothing wrong with that. But people need to read, too.”

Though much smaller, the adult literacy program is similar in structure to Learning Aid Ohio. That program, funded by the state and administered by DSACO, subsidizes the cost of tutors and aides for students with disabilities. Since November 2020, more than 2,500 students have been served.

DSACO is the sole sponsor for the adult literacy program. Its future scope, including whether it expands to people with other developmental disabilities, depends on additional revenue sources.

“It is such a brave thing for adults to step forward and say they want to be part of this,” Heiber said. “Depending on funding, we’d love to be able to honor that. I think it’s fair to say there would be many families other than ours who would be interested.”

Outcomes so far look promising. All pilot participants met or surpassed at least one of their goals; nearly 80 percent reached or surpassed 14 out of 18 goals. All of the adult learners, and nearly all parents and caregivers, said they would recommend the program.

To be able to read a book, street sign or menu is life changing, Ethan Boerner said. “I’ve wanted to do this for a while,” he said. “And I want to keep doing it.”

To find out more, go to www.dsacoliteracy.com