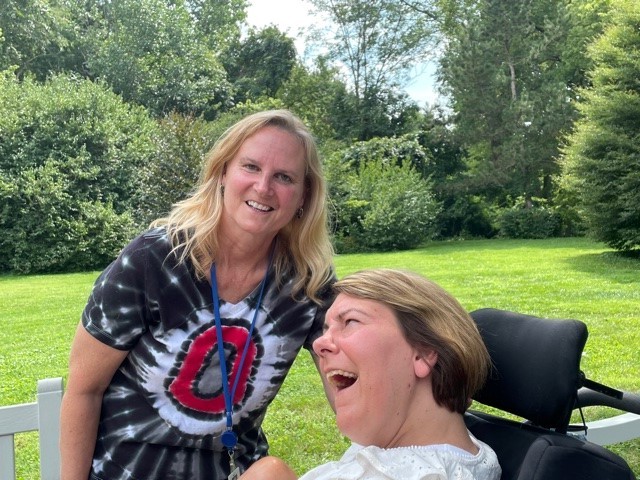 Alique and Kate enjoy an afternoon at the Park of Roses. Alique recently returned to the disabilities field as a DSP and says the job is a great fit.

As a direct-support professional, Alique Yardley is often approached by people who want to comment on her job, especially when she’s in a public setting with someone she supports.
“People come up and say, ‘It takes a special person to do what you do,’” Yardley said, smiling. “I don’t understand that. Because if you’ve had kids, or a brother or sister, or anyone you love – it’s the same thing.”
That outlook is so much of what makes Yardley an excellent DSP, the Hoogeveen family believes. Yardley started at Goodwill Columbus earlier this year and has been working with 44-year-old Kate Hoogeveen, a Westerville resident who has cerebral palsy and uses a wheelchair.
Kate is intelligent, opinionated and wants to call her own shots. Yardley instantly grasped all that.
“We’d had quite a few changes before Alique,” said Jackie Hoogeveen, Kate’s mom. “People quitting, people going to another job. Most of them have been great. But there was just something about Alique. The first time Alique came in, Kate felt so comfortable.”
Yardley took time to focus on Kate’s speech, which is affected by her condition. “The more you’re with Kate and talk to her, the easier it is,” Jackie said.
Kate is an active community volunteer, loves animals and shopping and participating in 5K races with her brother Eric, one of her four younger siblings. “He works to better his time while he’s pushing her,” Yardley said. “Eric and Kate fly.”
She sees Kate as a strong self-advocate, striving to make sure that she and others with disabilities are treated with dignity and respect.
When she’s out shopping, Kate tries to help people understand that she can make her own choices. She and Yardley also urge more businesses and community spaces to offer appropriate, private hygiene areas. “Once I was taken to a nursing home to change me,” Kate said. “That was not OK.”
Yardley, who had previously worked in the disabilities field, said returning this year “fit like an old glove. I got lucky, because folks like Kate make it easy.”