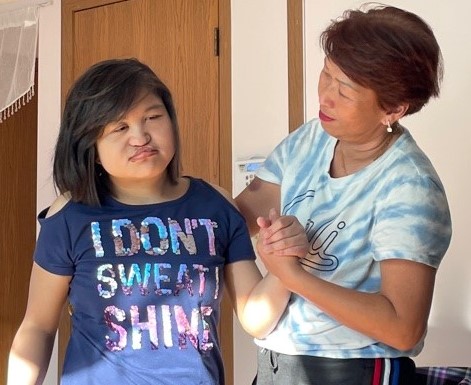 Jackie was born with CHARGE syndrome, a genetic condition that causes birth defects. She is blind now and likes to be close to her mom.

If she could, Rowena Gonzales would fund a mobile hospital in her native Philippines and use it to reach families who can’t afford care for children born with developmental disabilities.
“We could go all over and see who needs help,” she said.
Gonzales knows that in poor countries, the quest for care and support for people with serious disabilities can be a matter of life and death. She fought long and hard to keep her own family from experiencing a similar struggle.
“There are systems in place, but nothing like it is here,” said Gonzales, whose 27-year-old daughter, Jackylyn Siglos Gonzales, was born with a set of birth defects known as CHARGE syndrome. “If what we have in Franklin County is a 100, it would be a 2.”
Ten years ago this fall, a Cleveland immigration judge granted Gonzales lawful permanent-residence status for humanitarian reasons due to Jackie’s condition. The decision saved Gonzales from either taking her family to the Philippines, where Jackie – a U.S. citizen by birth — might not have survived, or losing custody of her child to adoptive or institutional care in the United States.
Jackie’s service coordinator at the Franklin County Board of Developmental Disabilities was among those who wrote a letter to immigration officials explaining that Jackie’s extensive medical needs were unlikely to be met in her parents’ community.
“Life is so hard there,” said Gonzales’ friend, Chat Padriga.
Gonzales became a proud U.S. citizen in 2019. Her younger daughter, Jaimelyn, is now studying to become a nurse. Both Jackie and Jaimelyn were born after their parents were brought to Ohio to work as performers during the AmeriFlora international floral exhibition in 1992.
“She’s completely blind now; that’s a part of the syndrome,” Gonzales said of Jackie, who also relies on a feeding tube and has severe cognitive impairment.
Her needs are sometimes overwhelming: Since losing all her vision, Jackie has become even more attached to her mother and isn’t tolerating her day-program environment. Gonzales had to reduce her job hours and is becoming certified to provide more of Jackie’s care.
“She is a very strong woman,” said Gonzales’ friend Herminia Carbon. “She stays in control.”
Gonzales is grateful for Jackie’s FCBDD services and works to help those less fortunate. “If I am blessed here, I share,” she said. “That’s our culture.”