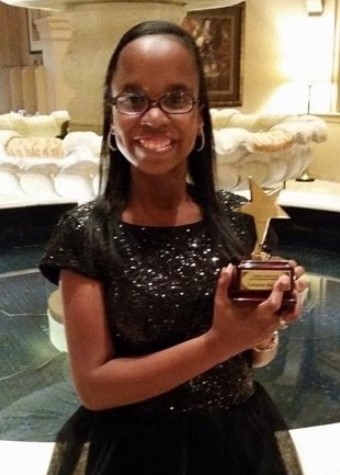 New board member Marci Straughter is a previous winner of the FCBDD Star Award.

Marci Straughter, a Dublin-area resident who receives services from the Franklin County Board of Developmental Disabilities, is making history as the first person with developmental disabilities to help lead the agency. She was appointed to the FCBDD governing board by the Franklin County Commissioners on Jan. 6 and will take her seat on the seven-member board during its next meeting.

“I’m excited. I think being on the board is important, because, who better to know how to serve people with disabilities than someone who has lived it?” Straughter said. “I want to help people understand what it’s like for us every day – the struggles, the challenges, and also the brightness.”

Straughter, 41, has long been active in the self-advocacy movement and has served on numerous councils and boards. As a trainer for the Ohio Self Determination Association, she has taught many other people with developmental disabilities how to speak out and speak up for themselves.

“We, along with the commissioners, believe it is important to have a diverse board that includes the perspective and insight of those we serve,” said Superintendent/CEO Jed Morison. “Marci has been a strong member of our self-advocate advisory council, is very involved in the community and is well-qualified. She’ll be a great addition to the board.”

Dana Charlton, executive director of the Ohio Self Determination Association, said Straughter shows how much a person with disabilities can accomplish “if they’re just given the opportunity, the support and the encouragement.”

For Straughter, applying to FCBDD meant being willing to give up her seat on the board of Boundless, a large disability-services organization that contracts with the county. She was proud of that accomplishment, too.

“My mom always said, ‘Sort out the pros and the cons.’ Before she passed away, that’s what she told me to do,” Straughter said. “I decided that by being on the Franklin County board, I can be helping everyone they serve. I can spread my voice more and help more people in my county, not just one agency.”

Though Straughter’s appointment is not a first for Ohio, relatively few of the state’s 88 county boards have members who also are served by the disabilities system. Morison said officials had been hoping for a while to make the recommendation but had to wait for an open seat that did not, by law, have to be filled by a family member in a specific category.

“Our board has members who have been very successful in business, government and technology, along with family members,” he said. “We have a great mix and Marci complements it well. She brings the lived experience.”