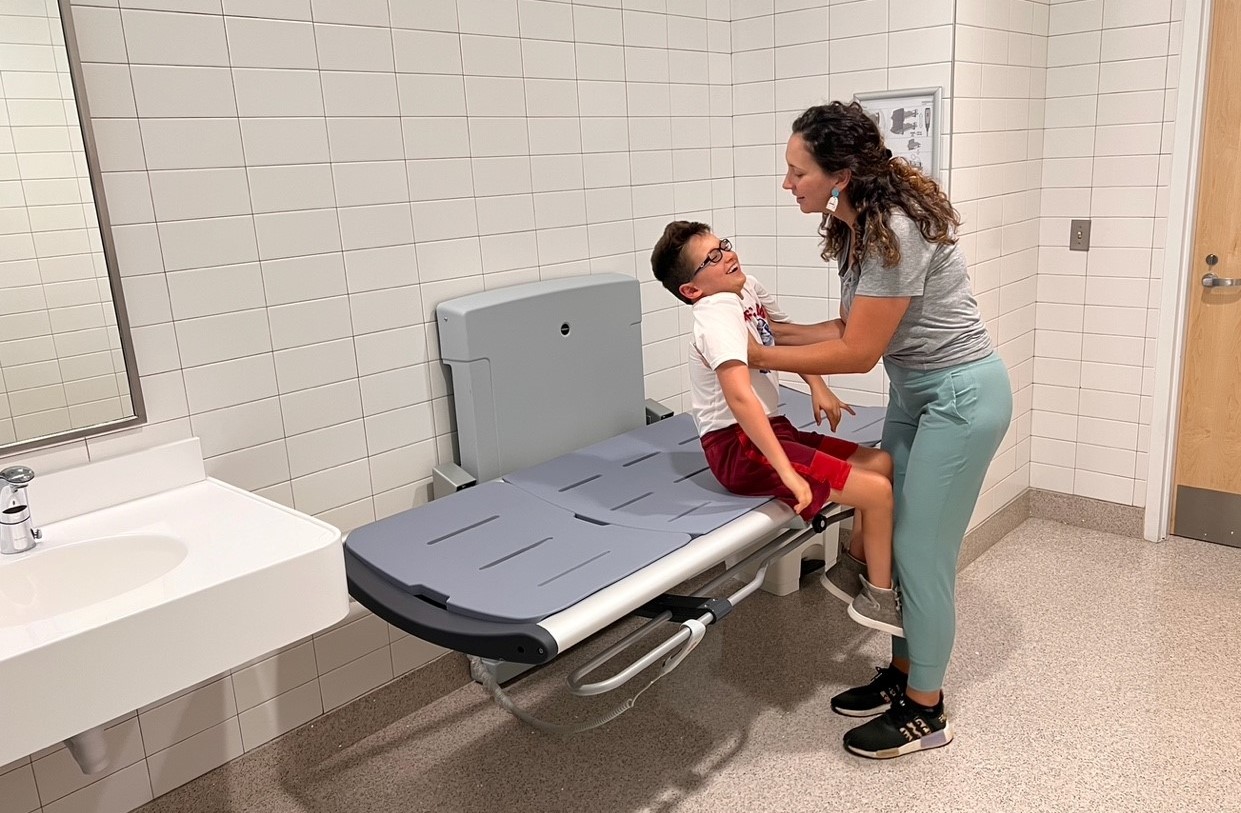 For many people with physical disabilities, the path to true community inclusion often stops at the bathroom door. That’s because there are hardly any public places with accessible restrooms that also include an adult-size changing table.

“It makes you isolated, even more than you already feel as a person with a disability,” said Kim Boulter, a central Ohio mom whose 9-year-old son has cerebral palsy.

Boulter first began working to address “the bathroom barrier” in her Delaware County community. She now advocates through Changing Spaces Ohio, part of a nationwide campaign to get more restrooms equipped with universal changing tables.

In the Columbus area, it’s almost impossible to find a public bathroom that accommodates an older child or adult who cannot safely use a toilet. The Columbus airport, City Hall, Franklin County offices and the Statehouse all lack universal changing tables, as do venues such as Ohio Stadium, the Schottenstein Center, Nationwide Arena and the Ohio Theatre.

The Franklin County Board of Developmental Disabilities is preparing to place a universal changing table in a main-offices restroom, and will make it available to the public. “We appreciate the advocacy of Changing Spaces,” FCBDD Superintendent/CEO Jed Morison said. “We hope our restroom can be a model for other facilities.”

Mark Hagen, director of public policy at California-based Momentum Innovative Disability Services, said bathroom accessibility can severely limit time away from home. “There’s been this move to create independence by using technology in the home, and believe me, I am all for that,” he said. “But very little is being done to make it easier to get people out in the community.”

In addition to calling for changing tables, the organization is rolling out mobile restrooms called “Momentum Refresh” that can be rented. Such vans also should be part of public disaster planning for people with mobility issues, Hagen said.

“I would like to ask Columbus City Council to purchase one to be used at festivals and outdoor events around central Ohio,” Boulter said. “It could also be rented by other cities in Ohio.”

So far, only a few states and municipalities are beginning to require universal changing tables in specific places, such as rest areas. But changing-table specifications have been added to the 2024 international building code, which is good news because it represents best practices, Boulter said.

The Delaware County Board of Developmental Disabilities has two restrooms with adult-size changing tables, and the agency has awarded accessibility grants to help other public entities install them, spokesman Chase Waits said. Orange Township received a grant and is adding a changing table at a park that happens to be a Boulter family favorite.

“I always try to envision the future, which is very difficult when you’re on the path less traveled,” Boulter said. “But I know that people with disabilities should not have to be changed on the floor, or exposed in the back of a vehicle. They deserve privacy and dignity, just like anyone else.”