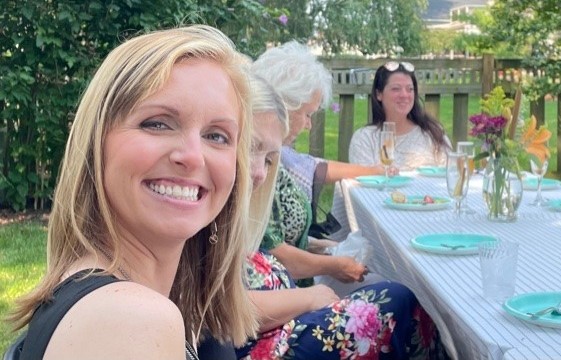 Rachel Barezinsky gathered with friends and family for her housewarming shower.

Over the years, Amy Kirk and Rachel Barezinsky have happily attended a boatload of showers to celebrate engagements, weddings and new babies. But until recently, neither woman had been the star of the show.
“And they deserve to be,” said Rachel’s dad, Greg Barezinsky.
So friends and family members decided to host showers for both Amy and Rachel as they prepared to move into an apartment together and live on their own for the first time. The step is huge – one that, as parents of adults with developmental disabilities know, comes mixed with joy and anxiety.
Amy, 43, has a job at Goodwill and had always commuted to work and other activities from her family home. Rachel, 32, works at a dental office and did the same. Rachel didn’t have disabilities until she suffered a brain injury at age 17 after a man fired a gun at the car she was riding in with friends, striking her in the head. Though her recovery has been nothing short of amazing, she has some paralysis on one side and struggles with her short-term memory.
“For 15 years, I felt that there was no safer place for Rachel than here with us,” her dad said. “And that’s how we approached it. And then it got to where I thought, ‘Wait. Are we holding her back?’’’
Amy and her family also had begun to think about the need for her to become even more independent. Rachel wanted to know that she can thrive on her own. “It’s time,” she said. “I feel like I have all the right people in place. I’m ready.”
The roommates, who didn’t know each other previously, had time to become acquainted and are settling into a duplex owned by the local nonprofit organization Creative Housing. They both received lots of housewarming gifts at their showers and look forward to decorating.
“Amy’s kind of quiet, and Rachel’s not,” Amy’s mom, Debbie Kirk, said with a smile. “We’re hoping they balance each other out.”
Amy’s sister, Kellie Stinson, said the family is beyond excited. “Amy’s been to so many of our wedding and baby showers – all the life milestones, she celebrates with us,” she said during Amy’s celebration. “We wanted this for her.”
Rachel and Amy now will have the same FCBDD service coordinator, Corrina Hyde. Though everything is falling into place with the home and service providers, the journey has been a long one, with no shortage of pandemic-related snags and delays.
“For me, this has been such a bright spot after all these difficult months,” Hyde said. “Both families are so supportive; both of these ladies are bright and happy people. And once they’re on their own, they’re still not alone. The support will be there.”
Drue Barezinsky, Rachel’s stepmom, said Rachel has approached the big move as she does most everything in life – with cheer and optimism. “She has the most positive spirit,” Drue said, refusing to be bitter even about the man who shot her. “She’ll say, ‘He’s in prison, and I don’t want to hate anybody. I just figure I still have this wonderful life.”